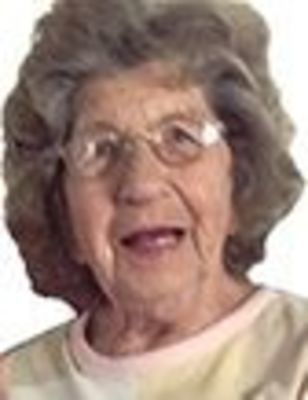 Billie Louise Peters Gabriele, 93, of Norton, died Friday, May 08, 2020 at her home, after a period of declining health.
She was born May 29, 1926 to Barney Echol and Ida Mullins Peters, the oldest of ten siblings. She grew up in the Josephine community of Norton, graduated from the former Norton High School, and then worked in the office of Dr. A.H. Bond.
Billie married Frank (Francis Adam) Gabriele and had three children. As her family grew up, she worked for the City of Norton, directing the Summer craft and playground activities in the morning and collecting pool admissions in the afternoon. She later worked as an assistant at Norton Elementary School before joining her husband as a sales clerk at Dave’s Department Store in Norton, from which she retired.
Billie enjoyed sewing, making most of her daughters’ clothes, including their prom and wedding dresses, and was in demand to do alterations. She also enjoyed watching baseball, walking, feeding the birds, and being outside in general.
Billie had been a member of St. Anthony Catholic Church for approximately 70 years, and, also attended St. Mary Church in Coeburn. Her husband, Frank, preceded her in death after 52 years of marriage. Also preceding her were her brother-in-law, Dr. A.J. Gabriele, and her brother, Bobby G. Peters, who had just passed December 28, 2019.

Billie Gabriele will lie in state from 10:00 until 1:00 p.m. Monday, May 11 at the Hagy & Fawbush Funeral Home in Norton. A graveside funeral service will be at 2:00 p.m. Monday at Powell Valley Memorial Gardens, with Father Timothy Drake officiant. The family and funeral home will observe Commonwealth and Federal safety guidelines regarding social distancing.

Memorial contributions may be made to St. Anthony Catholic Church, Norton, VA 24273 or to a charity of one’s choice. Online condolences may be made by visiting www.hagyfawbush.com.