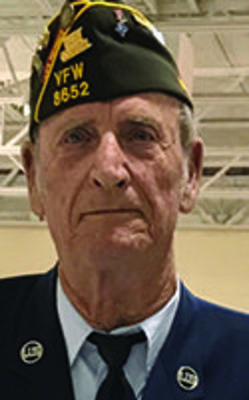 He was preceded in death by his parents, Beecher and Ethel; his siblings, Jack, Bill, Bob, Beecher, Lorraine, Agnes, and Judy, and grandson, Robert III.

David was a proud Veteran of the United States Air Force where he served in two wars, Korea and Vietnam. He retired as a Tech. Sgt from the USAF in 1974 then returned to his hometown of Coeburn where he worked at the Virginia Iron Coal and Coke Company until retirement. David was an active member in the Mountain Empire VFW Post 8652, he was a long time member of the Coeburn Masonic Lodge and Order of the Eastern Star, an avid supporter of the Coeburn/Eastside High School sports programs, he enjoyed music, golf and westerns, and was a passionate teller of tall tales and jokes.

The family will receive friends and family from 6-7 pm on Monday, November 16, at Estes Funeral Home, Coeburn where funeral services will immediately follow at 7 pm. A family graveside service will be held at Greenwood Memorial Cemetery at 11 am on Tuesday, November 17 full military honors presented by Norton/Coeburn/Big Stone Gap VFW and United States Honor Team and US Veterans of Foreign Wars Honor Team.

Those wishing to attend services are asked to please, follow social distancing and mask guidelines per the CDC.

Estes Funeral Home will be serving the Perry family.