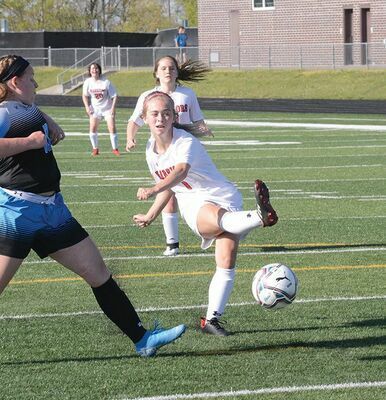 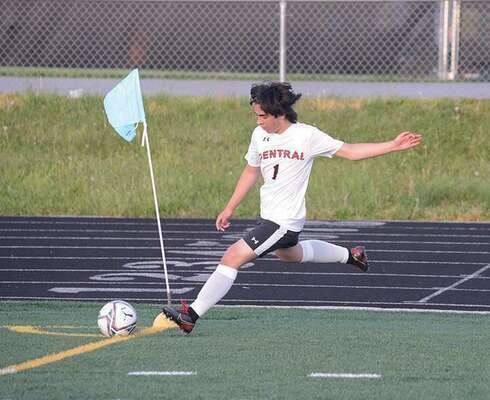 Ricardo Onate’s corner kick sets up the first goal of the game as Central took down the Wolfpack. PHOTO BY KELLEY PEARSON 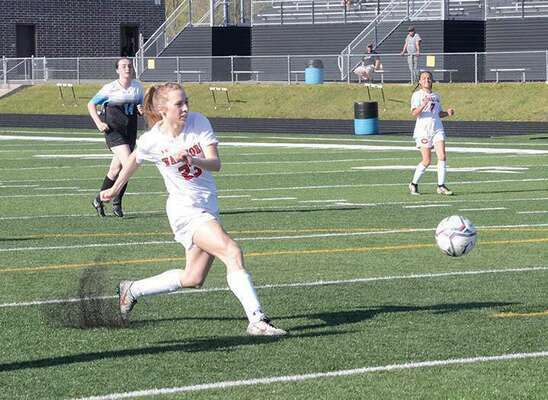 Alexandra Rogers scored the first three goals of the game against Ridgeview. PHOTO BY KELLEY PEARSON 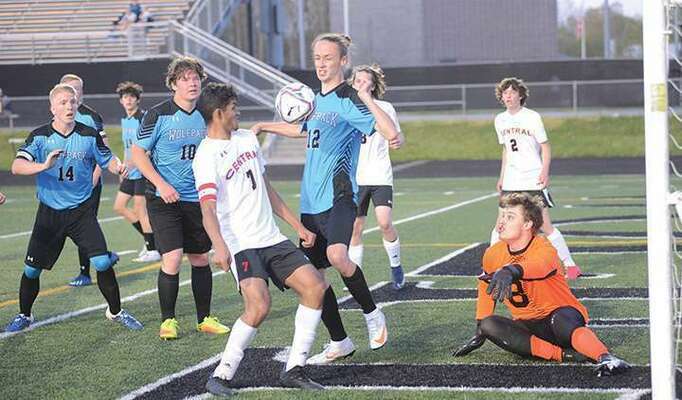 The Lady Wolfpack held off the largest part of the Central attack for the first half of the game. But, once things started clicking for the Lady Warriors, Ridgeview fell 7-1.

Central head coach Matthew Mullins and his team were just excited to be back on the field after two years.

“It was like the first game I had ever coached,” Mullins said. “It was such a strange feeling to think I had a game today. It was such a good feeling. I was just excited to get these girls back.”

The Lady Warriors controlled the ball in the Lady ‘Pack part of the field for the majority of the game. Strong midfield play from Central’s Isabella Sturgill and Lauren Mulkey kept the ball with the Lady Warriors.

“A lot of times midfield will go unrecognized, but they do so much work to help everybody on the team,” Mullins said. “I’m very pleased with the entire group.”

Alexandra Rogers moved to the striker position and scored the first three goals of the game. Sturgill and Mulkey also posted a goal apiece while striker Olivia Webb put down two scores of her own on the day. The Lady Warriors posted a total of 19 shots with a whopping 14 of those being on goal.

“It wasn’t just me,” Rogers said. “Soccer is a team sport and I couldn’t have done it without the assists from my team. We lost a lot of seniors and we were wondering how this was going to go. It was just so exciting to get out here again.”

In the boys game, the ‘Pack had a tough test against the strength of the Central midfielders. In the end, Central put up eight goals only halfway through the second half and the game was called due to the mercy rule, 8-0.

“I’m really proud of how our guys have played,” Dockery said. “They’ve worked extremely hard over the past two weeks. They were unselfish and shared the ball really well. I feel like that’s what led us to be able to score.”

The Warriors’ first goal came off a set piece as Ricardo Onate placed a corner kick in perfect position for Alex Dotson to send it past the goalie.

Ridgeview started their first possession of the second half with a strong drive down the field and a big shot, but goalie Gavin Hall got one of his three stops on the night.

Ashar Khan had the hat trick with three goals on the night as well as one assist.

“This means everything,” Khan said. “I have to give credit to the people who got me the assists. It’s the first game of the season and we have a very young team. We all came together tonight and it was a great team effort.”

Onate had two goals. Cam Orr had five assists and one goal. Lucas Coffey had two assists and a goal. Alex Dotson had a setpiece goal as well for the Warriors.