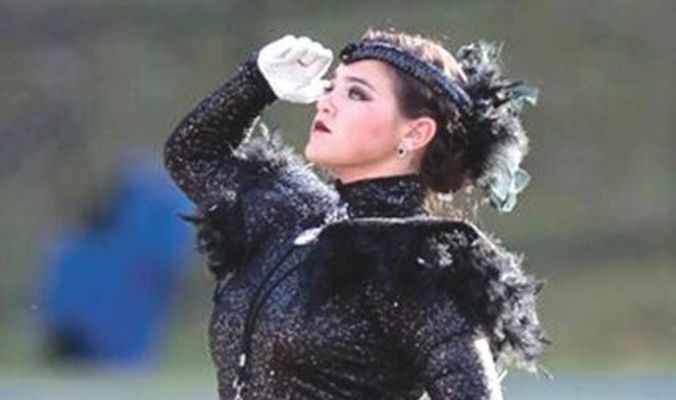 Sophomore Bethani Kiser just made Zoom history at the University of Virginia’s College at Wise.

The Pound resident landed the post of drum major for the Marching Highland Cavaliers, but the COVID-19 pandemic forced her to audition at a distance. Richard Galyean, director of bands at UVA Wise, and assistant Jason Bailey decided to give Zoom auditioning a try.

It was a rousing success, but Kiser said it was not without a bout of nerves.“Doing a Zoom audition was very different,” she said. “I definitely can say I’ve never done anything like that before.”

Kiser was drum major for Central High’s marching band and is familiar with the stress of performing before hundreds in the stands on a Friday night football game and in the tense performances in band competitions. However, the Zoom audition was not easy.

“I’m not sure why, but I was a lot more nervous doing it over Zoom than I would have been if it was in person,” she said. “I guess it was because of it being online and technical issues could have happened.”

The technology gremlins did not appear during her audition and she landed the position. “I’m very excited to continue my drum major career,” she said. “I really enjoyed it through high school and it made me want to be drum major in either a college marching band or drum corp. Now that it is actually happening it is wonderful.”

Kiser began band in the fifth grade and started marching in the seventh grade. She was drum major for Central High from the ninth grade through her senior year. She also plays saxophone in the Highland Winds and the UVA Wise Jazz Band.

“It was a first for us,” Galyean said of the Zoom audition. Kiser conducted a routine to a recorded song and answered many questions posed by Galyean and Bailey. Kiser will be joined by assistant drum majors Hayden Barker, a senior music education major from Saltville, Virginia, and Austin Farmer, a junior music education major from Hillsville, Virginia.
The Marching Highland Cavaliers hope to begin with band camp on August 8-14. The show this year will be a medley of video game songs ranging from The Legend of Zelda to Super Mario Brothers. The Marching Highland Cavaliers are always looking for new members. Prior experience is not required. “We’ll train you,” Galyean said. “So, if you did not have a chance to be in band in high school, now is your chance. The band has three requirements; support our teams, entertain the crowd and have fun.”

Kiser is eager to begin the new season. “My plans for this band season is to work hard, put on a great show for the audience, and have fun while doing it.”