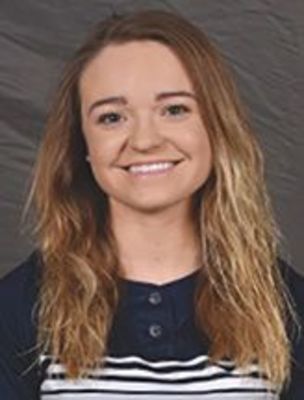 The Emory & Henry College Athletic Department recognized the accomplishments of the 2019-20 student-athletes by hosting its 7th Annual Blue & Golden Globes Awards Celebration, virtually, through the use of the department’s social media outlets.

The social media series, announcing the winners in 19 categories, was held via the E&H Athletics’ social media outlets of Facebook, Twitter, and Instagram. Winners included Caitlyn Yates of Coeburn. Yates took home the award for National Strength & Conditioning (NSCA). In her four years with Emory & Henry, Cailtyn has put up a .243 career batting average with a .353 on-base percentage and a .326 slugging average. She has scored 49 runs on 35 hits while also drawing 23 walks. Caitlyn also has six doubles, two home runs, 16 RBI and 21 stolen bases to her credit. She also appeared in two games as a pitcher her freshman season, earning a win in relief. In addition to softball, she is a member of the Blue Key Honor Society, Psi Chi Pychology Honor Society and is the Light It Up Blue Autism Awareness president. A member of the Alpha Beta Chi sorority, Caitlyn is a psychology major and has plans to attend Liberty University to pursue a master’s degree in developmental psychology and continuing on two her PhD. She will continue working with Blue Mountain Therapy upon graduation, transitioning into a full-time position as a Applied Behavior Analyst.

The Blue & Golden Globes is an event supported by the Student-Athlete Advisory Committee to celebrate accomplishments of the College’s student-athletes that excelled on the field of play, in the classroom, and the weight room.

The Raiders take the field for socially distanc...