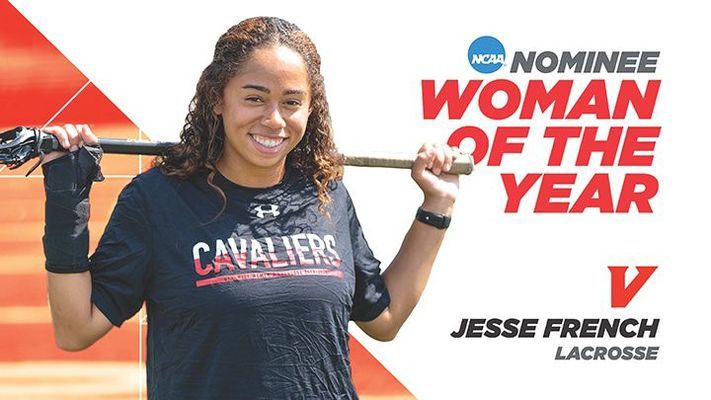 WISE, Va. – Senior women's lacrosse student-athlete Jesse French has been announced as a nominee for the 2020 NCAA Woman of the Year Award.

Rooted in Title IX, the NCAA Woman of the Year Award was established in 1991 to recognize graduating female student-athletes who have exhausted their eligibility and distinguished themselves in academics, athletics, service and leadership throughout their collegiate careers.

French began the 2020 season named to the Preseason All-South Atlantic Conference Second Team. The senior attacker reached a new milestone this campaign as she broke the program's individual career points record, totaling 215 career points before the season was suspended due to Covid-19. Last season, French aided her team to their second consecutive Mountain East Conference season and tournament title as she was named the tournament Most Valuable Player. This season, French started in all seven games and led the Cavaliers with 24 assists and added 11 goals while garnering Virginia Sports Information Directors All-State honors.

Off the field, French is actively involved in numerous organizations around the UVA Wise campus. The Dumfries, Virginia product is a member of the UVA Wise Conduct Board, Student Government Association, Lambda Phi Eta National Honor Society and the Student-Athlete Advisory Council where she has served as President the past two years. Named to the 2019-20 SAC Commissioner's Honor Roll, French also interns for the UVA Wise Athletics Media Relations department and the UVA Wise Multicultural Center.

French has elected to return to UVA Wise for her final season after the 2020 campaign was cancelled due to Covid-19. She is currently pursuing her degree in communications and will attend the University of North Carolina at Chapel Hill in 2021 where she will begin her graduate studies in Media and Communication.

NCAA member schools have nominated a record 605 female college athletes for the 2020 NCAA Woman of the Year Award. The nominees represent all three NCAA divisions, including 259 nominees from Division I, 126 from Division II and 220 from Division III. Nominees competed in 24 sports, with multisport student-athletes accounting for 128 of the nominees.

For more information on the 2020 NCAA Woman of the Year Award, visit http://www.ncaa.org/about/resources/events/ncaa-woman-year.