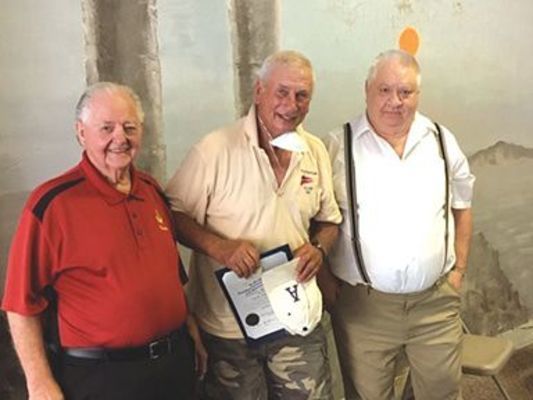 Randy Blair was awarded the Community Builders Award on August 13 during the Appalachia Lions Club regular meeting.
The award is awarded to a person for years of service to their community to make it a better place to live. Randy’s comment was, “he is very appreciative of the award and he does things because he has plenty of time and he loves what he does!” That pretty well sums up the reason he deserves this award.

Chuck Taylor traveled 7 1/2 hours to bring this award from Richmond to be presented last Thursday night at the Appalachia Lions Club meeting.

On hand to present Randy with this wonderful award was “Appalachia Masonic Lodge #229 A.F.A.M.” Worshipful Master, Hobie Bowers and lodge member, Chuck Taylor. A well deserved award for Randy, who has spent his lifetime doing for and helping others in any way that he could. Congratulations and thank you, Randy, for all your selfless love and support!

The Appalachia Masonic Lodge #229 A.F.A.M. and member Chuck Taylor had nominated Randy Blair to receive this award. It was approved by the Grand Lodge of Virginia A.F.A.M., signed by the Grand Master and Grand Secretary.

Randy was taken by complete surprise and was overjoyed at the award being presented to him.

He is a Bulldog fan but he is very proud and supports the Union Bears and is there for all their games.

Various wild mushrooms and tame ones are found ...