Lady Warriors open up district play with win over Ridgeview 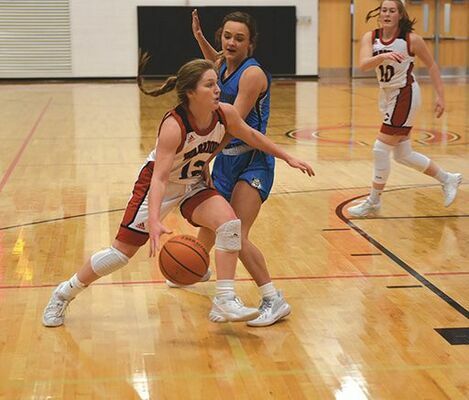 The Lady Warriors got of to a strong start and led 9-4 at the end of the first period behind the play of Isabella Sturgill and Jillian Sturgill. The Lady ‘Pack struggled in the period with the Warrior defensive intensity.

Central played a near perfect second period as they extended their lead to 28-18 by halftime. The surge was keyed by the play of frontline players Callie Mullins, Hannah Large, Bayleigh Allison and Hannah McAmis.

The Lady Warriors did not let up in the second half adding 17 more points in the third period for a 45-27 lead and 13 more in the fourth period for a final score of 58-40.

“They played hard and just wanted it more than we did,” Ridgeview coach Donnie Frazier stated following the game.

Central defensive pressure and guard play disrupted the Ridgeview offensive flow. Center Hailey Sutherland got in foul trouble in the first half and was forced to sit out at times during the final three periods. The bulk of the scoring was left to guard Brooklyn Frazier in the second half.

“The girls played good game tonight,” Central coach Robin Dotson said. “They really played their hearts out. I’m proud of them. We’ve really only had 13 days of practice.”

Central falls to Gate City for their first loss...