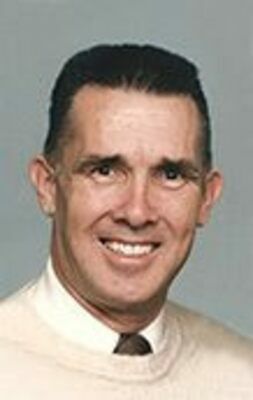 He was born on December 4, 1927 at home in East Stone Gap, in area known as Cracker’s Neck. This is near Big Stone Gap, Wise County, Virginia. He was the second of four sons born to James “Bud” Stewart and Beulah May Giles Stewart.

Ted spent his happy childhood years in this beautiful Powell River Valley area. In the midst of the Great Depression, his family moved nearby to Coeburn, so his father could begin working for the Virginia State Highway Department. Ted went home for lunch each day and when the school bell rang, he would run up the hill and beat the last bell for classes to begin. For most of his childhood, he lived on Meadow Street, just below “school house hill.” In high school, he enjoyed sports and played football and basketball. His older brother, Carl, took Ted with him when he went out with his friends and they were very close.

When Ted was a junior in high school his principal called him into his office. He delivered the devastating news that his dear brother Carl had died fighting in World War II. Carl was only 19 years old. He was an Army soldier in Metz, France and during a night mission on November 10th, 1944 and he was killed that night while serving under General Patton to liberate France.

Ted graduated from Coeburn High School in the Class of 1946. That summer, he enlisted in the Navy flight program as an apprentice seaman. In the fall, he enrolled in the Naval Aviation Program at Roanoke College, under the G.I. bill. Since Ted earned his pilot’s license before he received a driver’s license, it was only natural that was interested in aviation. He went on in May of 1950 to become an aviation cadet in the newly formed U.S. Air Force.

Ted met his future wife at a party in Coeburn and fell in love when she smiled at him, after reaching down to retrieve his ball during a miniature golf game. While home on a three-day pass from pilot school in Waco, Texas, Ted married Maxie Ruth Bryant, the daughter of Garland Eugene Bryant and Etta Mae Evans Bryant on July 16, 1950 in Clintwood, Virginia. In their early marriage, the young couple moved to Indiana, where they lived with kinfolk and Ted worked for General Electric. They returned to Coeburn and their first son, Carl was born. The Stewarts then moved to Arlington, Virginia, where Ted was employed on June 25, 1952, as a technician and then electrical engineer for the Department of Defense with the National Security Agency (NSA). During this time, their second son, Don was born and Ted finished his college degree in Physics at American University in the District of Columbia.

After NSA relocated to Fort Meade, Maryland, the family purchased their family home in 1959 in Seabrook, Maryland, twelve miles outside of the nation’s capital. With the birth of two more sons, James and Paul, their family was complete. They raised their “four boys” in the same house for 26 years at 9623 Woodberry Street.

Ted loved being a husband, father and engineer. He retired from NSA on January 3, 1986 after almost 34 years. During their retirement, Ted and Maxie lived in Blacksburg, Virginia, until after Paul graduated from Virginia Tech and was married. Then, they began spending winters in Florida and summers in Colorado. Ted had a life-long interest in sports and loved watching his family play in many ball games.

Funeral arrangements are being handled by Allnutt in Fort Collins, Colorado and Estes Funeral Home in Coeburn, Virginia. Ted will be buried next to his wife and parents in Greenwood Acres Cemetery, in Coeburn where a graveside service will take on Thursday, July 21, at 10:00 a.m. Family and friends are welcome to attend (casual attire).

An online guest register is available for the Stewart family at www.estesfuneralhome.com .

Estes Funeral Home  is honored to be serving the family of Mr. Ted Stewart.

Back to school event

Women and the game of baseball