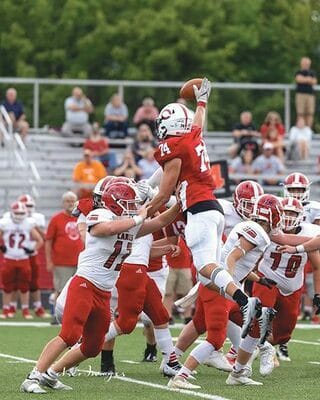 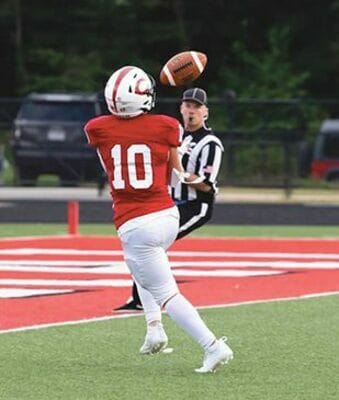 Dane Elkins gets the quick catch-and-run for another Warrior touchdown. PHOTO BY SAMMY BELCHER 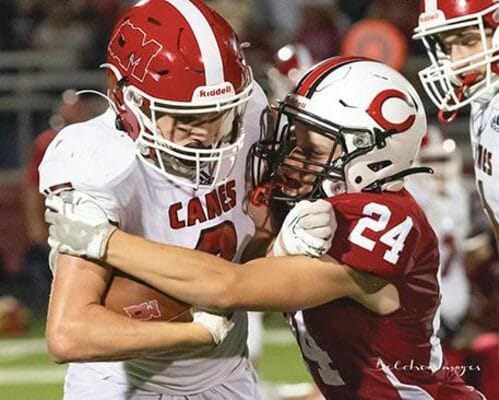 Jake Pinkard wrestles the ‘Canes running back to the ground. PHOTO BY SAMMY BELCHER
Previous Next

WISE — The Warriors posted their second straight of the season against the Marion Scarlet Hurricanes on Warrior Hill Friday night with a 49-28 victory.

Talan Yates got Central (0-0, 2-0) on the board first with a 38-yard touchdown run. Ricky Onate’s extra point was good and the Warriors had a 7-0 lead early.

Marion was quick to retaliate with a 49-yard touchdown pass, knotting the score at 7-7.

The second quarter was all Central. Running back Alec Gent scored twice with a 48-yard and a 37-yard run. Avery Hall also posted a 36-yard touchdown run of his own while Church found Elkins from 15 yards out for another score. The Warriors were up 42-7 going into the locker room.

After the half, the Hurricanes came back with a different strategy, trying to make a run. The scoring started off with a 50-yard interception return for a touchdown. Next up, Marion’s Fred Smith ran back a kick-off return 89 yards for another score.

Gent had something to say about the comeback attempt as he ran one in from 24 yards out. The score at the end of the third was 49-21.

The Scarlet Hurricanes had one last hurrah with an eight-yard touchdown run in the waning seconds of the game, but the Warriors came out on top.

Gent was the man to catch Friday night, rushing 13 times for 156 yards and three touchdowns.

“Offensively Gent had some really good carries and Church threw the ball well in the first half and we did what we wanted to do,” Mullins said.

“After I saw the holes, I could get up and get through, I just ran hard, put on my jets on and did my thing.” Gent said.

“We are going to win some ball games because we are a good team. We put in the work Monday through Thursday, and we come and get the paycheck on Friday,” Sturgill said.

“I thought Jude Davis played good as a linebacker and I thought my interior lineman with Clevinger and Sturgill played well,” Mullins said of his defense.

Central will face perennial rivals, Ridgeview in their first district game on Friday. Kickoff is set for 7 p.m. on Rose Ridge.

“It’s always a close game and we are going to go in there and give them our best shot,” Braeden Church said.

Broken records: Emmah McAmis is living up to an...