Don’t tell me I can’t: Caitlyn Ross is not quite finished breaking records at UVA Wise 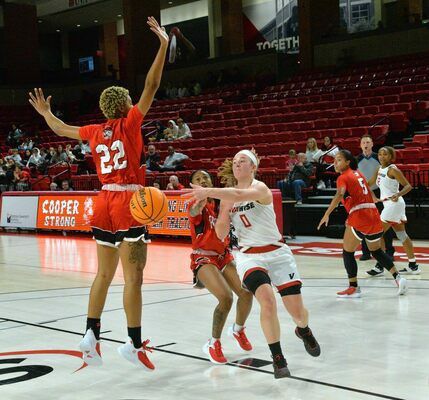 UVA Wise senior Caitlyn Ross doing what she does best and finding the open teammate. PHOTO BY KELLEY PEARSON 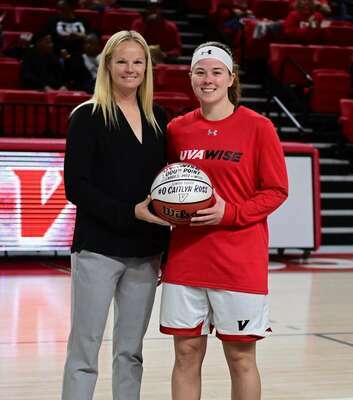 Kingston, Tenn. native Caitlyn Ross may only show up at 5-foot-6 on a tape measure, but since stepping on the court as a freshman, she’s been stepping up for the Cavs. Now looking at the possibility of graduation, her intention is to pay it forward by helping others. Step 1: tune out the naysayers.

“I was told all throughout my recruiting by several D1 schools and even some D2 schools that I wasn’t going to be able to play in their system because I was too small,” Ross said. “I just want future players to know that it doesn’t matter how you’re built or how someone looks at you. If you just keep working, you’re going to get noticed. Focus on yourself and don’t worry what other people say.”

Ross has taken her own words to heart. Currently, she holds the women’s career assist record halfway through her senior year while currently leading all NCAA Division II schools across all 50 states in total assists and assists per game. She is also the only UVA Wise basketball player to post two triple-doubles since the school moved to Division II athletics.

With her current assist total of 145 and a minimum of 11 games remaining in the season, Ross is also on pace to also break the single-season assist record (171 by Amber Carter 2010-11). But, it’s not just about dishing dimes. According to head coach Jamie Cluesman, Ross is the complete package and there was no way she was going to let her get away.

“Her AAU coach, Sean Armes, reached out to me shortly after I began working here,” Cluesman said. “He talked about several players, but would always circle back to Caitlyn. After watching her play, she immediately became my number one recruit. I don’t think we missed a single game of hers that summer.”

Ross had come on a visit to the UVA Wise campus before Cluesman took over. While she liked the area, she didn’t feel like she meshed well with the coaching staff. But, once Cluesman took over, she was more than willing to come back to Southwest Virginia and give it another go.

“[Cluesman] was a successful point guard and I felt like she understood and knew how far I could go. I knew she could push me to be the best I could be and that’s what she’s done,” Ross said. “Being from a small town myself, Wise really felt like home to me. This team feels like a family.”

In her high school career, Ross was a four-year letter winner for Midway High School. She was a two-time district MVP and was named to the All-State Class A team in her senior year. As a two-sport athlete, she also received an all-district nod in softball.

“Caitlyn is an incredible athlete who has allowed us to play in a lot of different ways. Her ability to score or set her teammates up for scoring opportunities gives us the ability to implement different strategies,” Cluesman said.

And score, she does. When she’s not passing off to her teammates, grabbing one of her five rebounds per game or getting her hand on one of her 187 career steals, she’s putting up the points. This season, despite the COVID-shortened 2020 season in her sophomore year, Ross scored her 1,000th point (currently at 1,137 and counting), becoming only the third player in the history of UVA Wise women’s basketball to score 1,000 points and dole out 500 assists in their career.

Ross has garnered a multitude of recognition by not only the South Atlantic Conference, but several other organizations have taken notice. She received her first SAC Player of the Week nomination as a freshman and was named to the SAC All-Freshman team as well as Second Team All-SAC in the 2019-2020 season. She was First Team All-SAC and First Team all-VaSID (Virginia Sports Information Directors) in 2020-21. Just this past December, Ross was named to the Division II All-Stats Starting Five by the NCAA.

Now as one of the most experienced players on the team being part of the starting five since her freshman year, Ross taken it upon herself to step into a leadership role. And while sometimes it can be about fun and games, when it comes to game time, she’s all business.

“I honestly think the freshmen were kind of scared of me at the beginning of the year,” Ross said mirthfully. “I’m pretty intense when I’m on the floor. But, I know what we can accomplish as a team, so I’m going to be tough. I think it gives them confidence when I push them because they know I have confidence in them. Off the floor, I love all my teammates and would do anything for them.”

This leadership role has become a very comfortable fit. Ross can definitely see coaching or mentoring in the future. Her giving nature is more than just in the assists on the court; Ross intends to get her degree in sports medicine and will potentially pursue medical school. At this point, she has not yet decided whether or not to take her extra year of eligibility at UVA Wise (due to the COVID season). As for her coaching staff, her team and the rest of the Wise community, we all hope we get just one more year of Caitlyn Ross magic.

“I definitely want to go into coaching in some way. I want to take everything I have learned throughout all of my years and be able to show it to the younger generation,” Ross said. “I want them to know that if you put in the hard work, you can accomplish anything you want. And that is not just a basketball lesson, that’s a life lesson as well.”