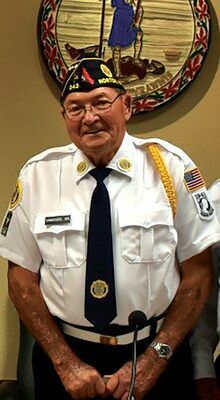 Gene Willard Vanover, Sr., dedicated son, brother, husband, father, grandfather, great grandfather and friend to many passed away peacefully on Saturday, January 21, 2023 at the age of 80.

Gene was born to Robert and Iola Vanover. After high school, he was drafted into the U. S. Army in 1960 and served two years during the Vietnam Era. He was honorably discharged in 1962 and went on to specialize as an electrician working in the mining industry. Shortly after starting his career, he met the love of his life, Beulah Kay McKnight and they spent 50 years together raising their family. They were blessed with four children, 10 grandchildren and 21 great grandchildren whom he loved dearly.

Gene was an ordained minister who spent many years pastoring several churches throughout southwest Virginia. He finished his ministry serving as Chaplain of American Legion Post 243. Thus, commencing an amazing 40-year ministry sharing the gospel.

“I have fought a good fight, I have finished my course, I have kept the faith: Henceforth there is laid up for me a crown of righteousness, which the Lord, the righteous judge, shall give me at that day: and not to me only, but unto all them also that love his appearing.” 2 Timothy 4:7 & 8

Through the years, Gene enjoyed working jigsaw puzzles, spending time with his familyand hunting with his sons and grandsons. His four legged companion, Little Doe, was a loving and faithful friend until the very end. He enjoyed family gatherings, birthday celebrations and was always up for a good game of ROOK. He made friends wherever he went and was the king of corny jokes and funny stories about the good ole days.

Funeral services for Gene Willard Vanover, Sr. was conducted at 7:00 PM Monday, January 23, 2023 at the Sturgill Funeral Home Chapel in Wise, Va. with Reverend Marty Puckett officiating. The family received friends from 5:00 p.m. till time of services at 7:00 p.m. Monday at the Sturgill Funeral Home in Wise, Virginia. Graveside committal services with military rites was held at 11:00 a.m. Tuesday, January 24, 2023 at the Wise Cemetery in Wise, Va. Burial followed. Family and friends met at 10:30 AM Tuesday at the funeral home to go to the cemetery in procession.

The Old Man of the Mountains — Rudy Parsons